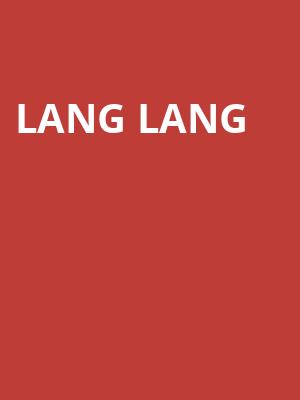 The hottest artist on the classical music planet

EXPERIENCE THE LANG LANG EFFECT FOR YOURSELF

Lang Lang has played sold-out recitals and concerts in every major city in the world. He holds the distinction of being the first Chinese pianist to be engaged by the Berlin Philharmonic, the Vienna Philharmonic, plus all the major American orchestras. Described as the People's Republic's first crossover star, he heralds a new era in music; a huge achievement from his humble beginnings as the son of a vice police officer and a telephone operator.

This young yet eminent classical artist has appeared in Time Magazine's annual list of the 100 Most Influential People in the World and in 2008, his skills caught the imagination of over four billion people as they watched Lang Lang's performance in the opening ceremony of the Beijing Olympics. Within China, his influence has grown to such an extent that he has inspired over 40 million children to learn to play classical piano - a phenomenon coined as "the Lang Lang effect" by the BBC, which today shows no sign of slowing down.

You may be required to wear a mask during this performance. Please contact the venue directly for more information.

We wish Lang Lang performed both pieces of the program. It was over too... more

Read all reviews Write a review

Sound good to you? Share this page on social media and let your friends know about Lang Lang at Granada Theatre.