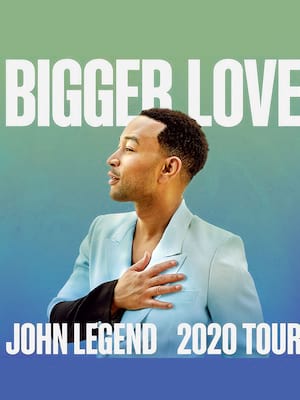 I live and breathe music.

EGOT holder and ten-time Grammy award winner John Legend is hitting the road this year as he heads out on his Bigger Love Tour! The news comes after the R&B heart throb's latest track, "Conversations in the Dark" hit the number one spot on iTunes, sparking speculation about a potential new album.

A man of many talents, John isn't just about the music! Legend also lends his toolbox to theatrical projects, garnering his Emmy award for his starring role as Jesus in the TV production of Jesus Christ Superstar Live! as well as a Tony award for 2017's Best Revival of a Play, Jitney, which he co-produced.

With six (many of which have gone multi-platinum) albums under his belt and tracks like "All of Me", "Ordinary People" and "Green Light" in his back pocket, gear up for a night like no other with the "King of Valentine's Day".

I'm so excited to see John legend for the first time! Is going to be wonderful!... more

Read all reviews Write a review

Sound good to you? Share this page on social media and let your friends know about John Legend at Santa Barbara Bowl.